$8 Standard Ground Shipping on orders within the lower 48 states. 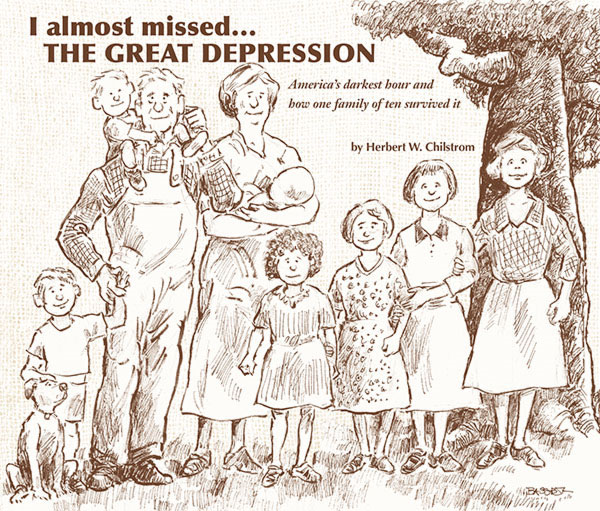 Herb Chilstrom was born on October 18, 1931, in the depth of the Great Depression. He has a few scattered memories from his earliest years. He wanted to know more. After authoring several other books since he retired in 1995, Chilstrom determined to probe the difficult years of the decade of the 1930's, years that tested the mettle of the nation and the world. He writes about the presidencies of Herbert Hoover and Franklin Delano Roosevelt, the causes and effects of the 1929 Crash, the First Hundred Days, the New Deal, The Works Progress Administration (WPA), and much more. On these pages he weaves into that larger historic fabric the story of his own family, including parents Ruth and Wally and his seven siblings. First on the farm and then in the city of Litchfield, Minnesota, they pulled together and managed to survive through bank failures, severe winter blizzards, intense summer heat and drought, seperation, unemployment, near-homelesssness, frequent pregnancies, loss of farm animals, and mounting medical bills. Ruth's simple daily diaries were an invaluable source of information. Chilstrom also describes the role families and communities played in helping friends and neighbors deal with the challenges of the time. Any reader who experienced part or all of the Great Depression, or who heard stories of that era from the lips of parents or grandparents, will appreciate this book. In non-technical, easily understood language Chilsrom descibes the events that shaped forever the eras that followed the Great Depression.